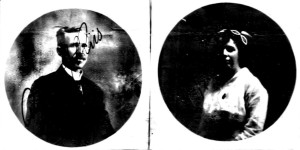 I wrote this brief biography of my great-grandfather’s brother in 2005 at the request of the Richmond Hill (New York) Historical Society.

Andreas Jensen Riis was born February 28, 1869, in Nyker, Denmark, on the island of Bornholm. Andreas was the eldest child of Hans Thomias Jensen Riis, a mason, and Christine Margrethe Andersen, and was followed by Jens (b. 1871), Hans (b. 1877), Caroline (b. 1881), and Anne (b. 1884). The three Riis brothers learned carpentry from their maternal grandfather Niels Andersen, who lived with the Riis family in his elder years.

Andreas and his brothers were educated at architectural school in Rønne on Bornholm and served as apprentice carpenters in their teens and early twenties. Andreas left Denmark for New York in March 1891. Americanizing his name to Andrew, he lived in Jamaica briefly before settling in Richmond Hill. His brothers Jens and Hans followed Andrew to America in 1891 and 1893 respectively, and sister Anne joined them in 1902; sister Caroline died in Denmark at age 14 in 1896. Hans Riis became a long-time resident of Richmond Hill as well.

Andrew married a fellow Danish émigré, Marie Ellena Jorgensen, in 1893. Their first son, Edward, was born in 1895 and another, Arthur, in 1901. Marie died November 24, 1905 at the age of 37 of tuberculosis. Marie was buried in Maple Grove Cemetery in Kew Gardens. Andrew married his second wife, a Canadian author, Stella Eugenie Asling (b. 1875), in Hamilton, Ontario, on October 10, 1906.

At one time the three Riis brothers were in complimentary lines of work: Andrew as a builder, Jens as an architect, and Hans as a builder and millwork manufacturer. Keeping to the theme, sister Anne married a Danish builder’s carpenter Niels Sondergaard.

Andrew and Stella were very active in civic and community affairs and were members of the American-Scandinavian Foundation and the Danish American Women’s Association. They attended the First Presbyterian Church of Jamaica, where Andrew served on the building committee during the construction of the Church House in 1925-26.

Jens eventually moved to upstate New York and Hans moved his growing millwork factory to Floral Park. Anne and Niels moved to New Jersey. Sadly, Andrew hanged himself in the cellar of the home he built in Richmond Hill at 85-25 117th Street on February 16, 1936. Andrew was buried in Maple Grove Cemetery in Kew Gardens on February 19, 1936. His widow Stella eventually sold the Richmond Hill home and their summer home in Honey Harbor, Ontario, and moved back to Canada, where she remained until her death in 1957. Andrew’s remains were subsequently removed to Hamilton Cemetery in Hamilton, Ontario, to rest alongside Stella.

Andrew’s son Edward became an accountant and moved to Pennsylvania, where he met and married his wife Edna and adopted a daughter, Betty Lou. Tragically, Edward also committed suicide by jumping from a bridge in New York City in the early 1950s. Andrew’s other son, Arthur, became a draftsman and building engineer, and died in Williston Park, New York, in 1968. He and his wife Elizabeth were childless.

An interesting quote from Stella Asling Riis from the New York Times, January 21, 1921: “I am as particular about climate as Goldilocks was about her soup. I don’t like the South, it is too hot, and I don’t like the North, it is too cold, so I am very glad that I have found a spot that it is just right – here at Richmond Hill, L. I.”

Posted by Our Union Page on October 14, 2013 in Biographies