Of all the branches in our family tree there is but one that cannot be traced through to an ancestor leaving his or her home in Europe for a new life in the New World, for that branch was already here. That part of our family heritage has its roots in the Kanien’keha:ke tribe of Eastern New York.

Pieter Adriaense Van Woggelum (1613-?) and his brother Jacob left their native Woggelum in Noord-Holland with their widowed mother, Anna, to settle in Beverwijk (now Albany) in the Dutch colony of Nieuw Nederland. Both Pieter and Jacob set up shop as innkeepers. 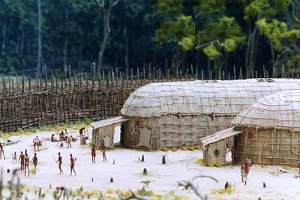 Around 1641 Pieter married the daughter of Caniachkoo, the sachem of the Turtle Clan of the Kanien’keha:ke (Mohawk) tribe, who represented the Kanien’keha:ke in the Haudenosaunee (Iroquois) League of Five Nations as well as in the sale of land to a number of Dutch settlers. While the birth name of Caniachkoo’s daughter is unrecorded (some unsubstantiated sources give it as Ack-Toch), upon her marriage to Pieter she assumed the name Lysbet (AKA Lysette).

In 1664 Pieter Sr. had a patent for a bowery or farm and home lot in Schenectady but sold it in 1670 to Helmar Otten for the price of 35 beavers.

Peter is last mentioned in records in June of 1681; there is no reliable record of when he died. Lysbet appears to have died in Schenectady in 1703.

The 1613 treaty between the Haudenosaunee and the Netherlands is still recognized by both governments 400 years later.

Posted by Our Union Page on November 9, 2013 in Biographies, Immigrant Stories

One response to “Our Kanien’keha:ke Heritage”