2nd Lt. Bill Gmelin (2nd from right) and flight instructor George Jones (center) pose with members of the 3077th Pilot Training Group alongside aircraft 7636, the plane they were flying on the night of June 16, 1955.

Note: The eyewitness testimony quoted here is taken from United States Air Force Accident Report 55-6-16-5, obtained by me through the Freedom of Information Act. 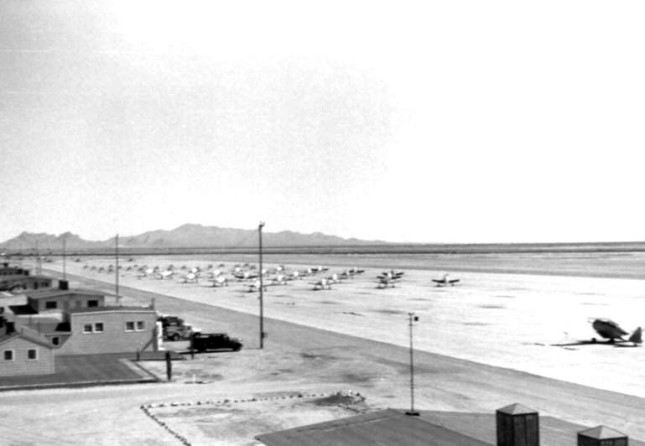 In June of 1955 Second Lieutenant William Gmelin was a student pilot in the 3307th Pilot Training Group at Marana Air Base near Tucson, Arizona, with 97.25 hours of flight time. Mary Jane was 8 months pregnant with their first child.

“Lt. William J. Gmelin was in my car pool and I was the one who drove on 16 June 1955. Lt. Gmelin was in his usual good spirits that day. As I recall he had gone swimming that day around noon time and that was not unusual fatigue for him as he went swimming whenever a P.T. period permitted. He made no unusual comments to me that day and from all that I witnessed it was just an ordinary flying day.” – James W. Sorensen, 2nd Lt., USAF

“The first flight of the day, June 16, 1955, didn’t commence until approximately 1445 hours, as the first two planes assigned to us had to be written up. Lt. William J. Gmelin flew on this first flight with [civilian flight instructor George] Jones and they didn’t return until approximately 1630 hours at which time I went up for a fifty minute dual ride.” – James W. Sorensen, 2nd Lt., USAF

“I was on tower duty on the night of June 16, 1955, with Mr. Bushman. Mr. Jones flew the first flight of the evening in aircraft #313 on a dual navigation mission. Take off time was 1942. When he returned he was instructed to park #313 on the regular row.” – H. H. Samuels, Flight Commander

“To the best of my knowledge and memory, Lt. Gmelin was in his normal good spirits and physical condition on 16 June 1955. He possessed his normal confident manner and appeared to look at this flight as just another flight. When Mr. Jones and I met him at the aircraft he was ready to climb in. Lt. Gmelin said he had performed the pre-flight check except for the lights. I checked the lights while Mr. Jones pre-flighted the aircraft. Lt. Gmelin got in the aircraft and performed his cockpit checks. Lt. Gmelin started the aircarft, signaled chocks out and rolled out to the runup area in a normal manner.” – Ralph D. Brown, 2nd Lt., USAF

“[Mr. Jones] was assigned aircraft number 636 for dual local with Lt. Gmelin, this takeoff time was 2243. They remained in the pattern and completed four touch and go landings then departed for the area orientation in the area. His last pitchout call was made at 2313.” – M. J. Bushman, Senior Instructor (Tower Operator)

“Tower records and all other evidence indicated that the aircraft… was at or above 5000 feet when trouble of an undetermined origin occurred. No radio call was made by the aircraft.” – Jack l. Selling, Operations Officer

“I had taken off from Davis-Monthan AFB at 2310 MST and was climbing to altitude over the field. On one of the circles when approximately three miles south of D-MFAB, I noticed a brilliant flash north of Tucson. I noted the time to be 1135 MST.” – Lyle A. Geer, Captain, USAF

“While on the way to work at Arizona Public Service Company, Saguaro Plant, 4 miles south of Red Rock, on the night of June 16, 1955, about 2 miles south of the plant I was watching the large amount of planes in the air, and someone remarked about it. Suddenly I noticed a large flash of light which was almost blinding. The approximate time was 11:30 PM. After the flash this light burned very bright….” – Lawrence J. Davies

“I was driving a truck for Time Freight Lines, Inc., on Thursday night, June 16, 1955, on my way between Phoenix and Lordsburg, New Mexico. Between Picacho and Red Rock, Arizona, I saw a plane flying at a low altitude, approximately 150 or 200 feet and it had its wing and tail lights on. About 60 seconds or so later it crashed and exploded and began to burn.” – Lee T. Hendricks

“I was riding to work on the night of June 16, 1955, seated in the rear seat, and I was looking across the desert into the darkness when right before my eyes I saw a terrific ball of fire rise up from the ground. … I saw nothing before I saw the countryside light up by the ball of fire. On reaching work I checked with the Phoenix dispatcher and then called the flight commander at Marana, who informed me it may have been one of their planes.” – Gerald W. Parks

“Flying dual in aircraft #641 with Lt. Adkins, we were dispatched to investigate the crash. At the scene of the crash there was considerable fire. The desert brush was burning an area about 500 feet or more long and 150 feet wide. The aircraft was burning in about four or five different parts in an area of about 50 feet circle.” – Roy Elder, Instructor Pilot

“I saw a flaming mass and then almost instantaneously an explosion. My instructor, Mr. Elder, reported the crash to the control tower, and they dispatched us to the scene of the crash. We were told to stay there and inform the tower on anything we could see. … We directed the crash crew to the scene by talking to the tower and they relayed our directions to the crash crew. We also used our landing lights to give them the general direction of the crash.” – William K. Adkins, 2nd Lt., USAF

“On the night of the 16 we were coming to work at the Saguaro Power Plant. … When the plane hit it made a very bright flash and the fire leaped a great distance into the air. The flash didn’t last very long, but when we got to the plant I went to the top of #2 boiler and there was still a good size fire. About 1:00 AM I noticed some headlights going out to the fire. At daybreak we could still see smoke out there.” – Charlie Goitia

An investigation and hearing into the crash were conducted in the weeks that followed. The investigation’s conclusion:

“The cause of this crash is undetermined. The imprint of this aircraft on the ground at the point of impact and dispersal of the debris indicates that the aircraft struck the ground in a near vertical dive and exploded upon impact. There was no radio call from the crew and no evidence of fire in flight either from nearby eyewitnesses to the explosion or from examination of the empenage. The attitude and speed of the aircraft is believed to be the only key to the accident cause. Either fouled primary controls or misuse of controls through disorientation or other such factors are the only apparent conjecture possible. The extent of distortion of the aircraft and engine left little chance of establishing whether or not there had been a mechanical malfunction. There was no foreign object likely to have fouled controls found in the wreckage.”

Bill’s dog tags were recovered from the debris field; there were no identifiable remains. 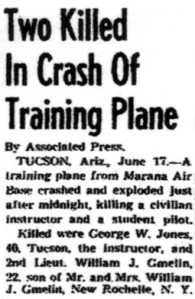 Mary Jane Butler Gmelin Gill poses in 2001 with a portrait of herself at age 7, painted by her neighbor, Norman Rockwell.

Posted by Our Union Page on December 21, 2013 in Biographies